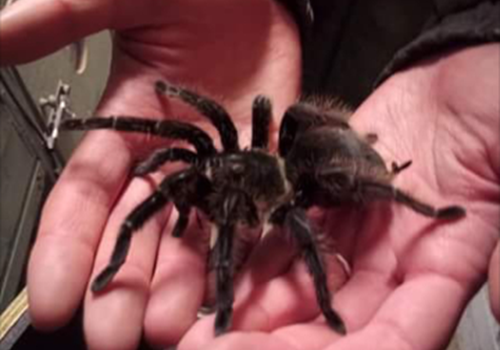 They catch their prey using venomous fangs, which both paralyses the unfortunate prey and begins the digestion, enabling the tarantula to suck up all of the proteins and fats, leaving just a small ball of undigested body parts behind.

All about Curly Hair Tarantula

The Curly Hair Tarantula Brachyplema albopilosum is named for its distinctive long and curly bristles that cover its body. The longest bristles are golden brown, which gives them a distinctive bronze sheen, especially on their hind legs. The males are often a lighter shade of bronze than the females.

Like most tarantulas, they are generally very docile and shy, but will kick stiff hairs if threatened, which can cause skin irritation or a rash. The only time they can be aggressive is during mating season, where unreceptive females will fight advancing males that try their luck!